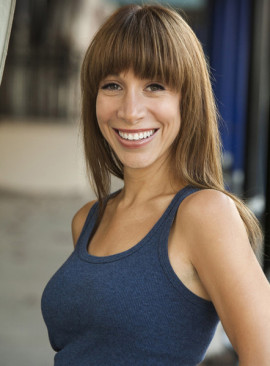 Meet the real-life Lara Croft! Growing up in Florida, Fayerman cultivated her love for exploring from a young age and has many fond memories of "slogging the slough" in the Everglades, looking for treasure on Captiva Island, and making big plans to uncover the Fountain of Youth!

Due to being home-schooled, Ilana had the freedom to research the subjects she found most fascinating. That meant many book reports were penned on Loch Ness, storm chasing, volcano trekking, ghosts, and historical adventure quests. At the age of 12, Fayerman found herself bolding informing her mother that she planned to be an adventurer one day!

In 2005, she received her Master's degree from Columbia University, in Socio-Cultural Anthropology(with a specialization in documentary cinematography), where she studied under documentary TV industry leaders, including Emmy-award winning cinematographer Larry Engel.

Drawn to exploring global rituals of medicine, healing, music and religion; antiquities; "lost" civilizations; and humanitarian challenges around the world, in 2006 she was brought on as a series regular host for the award-winning travel web series ProjectExplorer, which cultivates young, global citizens and has an online audience of over 2 million loyal viewers.

In October 2008, she won a GOLD Parents' Choice award as series host and producer of ProjectExplorer's Jordan: Cultural Crossroads series.

In 2009-2010, after a lengthy casting process that combed the globe for Anthropology/Archaeology and History experts, she was selected as one of the hosts of SyFy's new adventure travel show, co-hosting the pilot with noted Historian Ashley Cowie.

In 2011, Ilana was named by Florida Magazine, as one of the year's Most Intriguing Floridians

In 2012, Fayerman (along with her husband, Edward Campbell) launched the holiDAYtrips travel video blog. The blog celebrates travel and food; and introduces viewers to different world holidays with unique humor and creative film twists. Within months of putting it up, Fayerman & Campbell have already garnered a devoted audience.

She's scrambled though jungles, descended into tombs, slept in caves, climbed volcanoes,visited shaman, and acquired an impressive collection of bumps and bruises. She loves going anywhere you can take your wine out of the restaurant, never travels without her climbing gloves, and still can't figure out how to drive a Vespa!

Living by a "try anything once" mentality, Ilana loves to sample indigenous foods...though, she draws the line at spiders! She has snacked on the likes of salt & vinegar crickets in NYC, goat heart Wadi Rum, wildebeest and raw crocodile in KwaZulu Natal, and some very large, tomato sauce-drenched Mopani worms in Johannesburg.

The Kickstarter campaign for my first documentary feature, New York After Dark, made its funding and we're moving forward!

Learn more at the so hum productions area of the site.

Check out the contact section to get in touch! (I love pen pals!)